Snippet Review | A Darkness Strange and Lovely by Susan Dennard 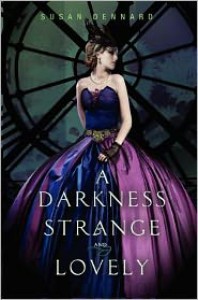 EMOTIONS. That’s it. That’s my review. But since that isn’t overly helpful or at all descriptive, I’ll endeavor to explain why. The end of Something Strange and Deadly leaves Eleanor somewhat alone and abandoned. A Darkness Strange and Lovely capitalizes on just how much she’s been so, and depicts the changes and shifts within Eleanor’s character as a response to and because of the situation she’s found herself in. I’ve never considered Eleanor to be anything other than strong; she’s always been wonderfully independent, headstrong, knowing her own mind and extremely capable. But she’s pushed to her limit in A Darkness Strange and Lovely — her mother taking a leave of absence from sanity, The Spirit Hunters (and Daniel) having to flee from Philadelphia, her financial outlook grim with no one but herself to depend on, her social circle ostracizing her, a threatening promise beginning to manifest, and a dormant power within her taking over. The choices she makes are uncomfortable and conflicting, the tension between her and her friends heartbreaking, the dangers she faces are greater, more horrifying and even more personal than before… and it all comes together beautifully in this second novel. And thus, creates ALL THE EMOTIONS.

Overall, It’s even better than the first and I cannot wait for the final act!